This post is part of my GSOC journey in coala.

In this week, I was writting a patch into autoflake for a new feature that could expand a wildcard import to specify each name that really was used in the code.

Autoflake and how it work

Short introduction. Autoflake is a tool for automatically remove unused imports, unused variables, and useless pass statemant from Python code. It was mainly dependent on pyflakes, a python code checker, which provide the analysis foundation to check for the faulty code. Autoflake itself just handle the code manipulation part based on pyflakes report and actually remove those.

The import re statement will be removed because it was detected as unused.

Here are a simplified version on the step autoflake take when examining a code:

Automatic code manipulation like autoflake is a sensitive thing and a mistake on its algorithm could result make a fine, albeit dirty code into a completly broken code. Which is why autoflake have few different test kit to make sure it was working correctly.

Stop about autoflake, what do I do in the patch?

Here are the issue that propose the new feature. 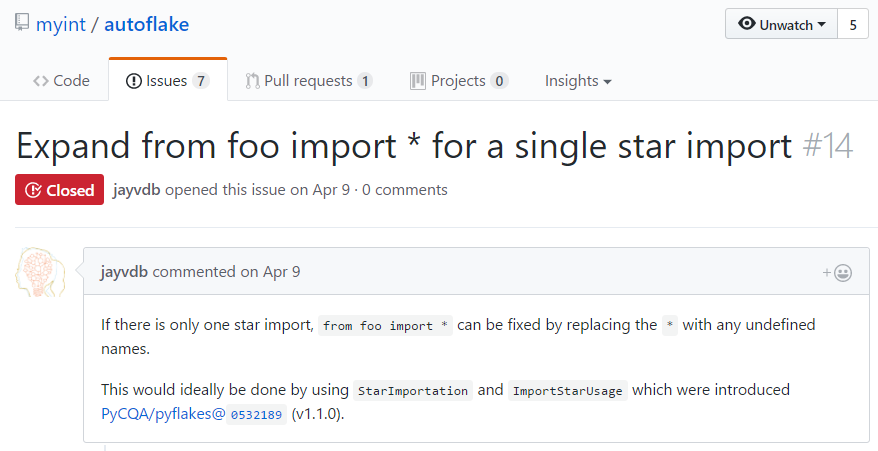 First, let us understand what is this feature about.

Essentially, autoflake should define implicitly list of name that was imported and used from a wildcard (*) import. A wildcard import is something like from <module> import *. Usage of wildcard import should be avoided according to PEP8 and general sentiment of my quick Google search, except in a few notable cases.

So, how exactly this feature will work? I think an example will make it easier to understand.

will have its wildcard import expanded to explicitly say what exactly list of names that was imported from other module and is used in this code. In this case, we use cos and sin function from math. We do not use any other function from math module and doesn’t want it to dirty our root namespace. Then it should became like this…

But, how could we know what names is undefined? If we run that code into pyflakes, we will get the following report:

As we see, pyflakes could point out which names was undefined and the possible origin of those.

However, there will be some limitation. Because of pyflake only parse the code without actually run/intepret it, they don’t really know from what moudle a name could possibly came if there exist more than single star import.

Now, the undefined name could possibly came from math or re. We don’t exactly know which one and thus we can’t automatically expand those without risk of choose the wrong one. The feature limitation is the expanding only could be done when there was exactly one star import on the whole file.

The patch code itself

As the first step, we need to make autoflake know about the new error type that relate to star import usage. This could be done by declaring new function that filter list of pyflakes message object to choose our specific error type.

I write 2 filtering function for this. star_import_used_line_numbers() will find the line number where the import star syntax from <module> import * was used. star_import_usage_undefined_name() in the other hand will find the line number of undefined name that probably came from star import. It also outputing additional info like the name itself and the possible module origin which both was passed by pyflakes.

The content of the function itself was pretty standard and I think was self- explanatory.

Filtering the errors and group up undefined names

Next step is call the filtering function above to filter the pyflakes report. This was done filter_code() function, which is one of the most crucial function in autoflake.

Then autoflake will iterate each line in code to try fix problem in each of it.

The core part that actually do the work. This function will take a line containing the problematic star import and replace the wildcard with list of name that was otherwise undefined in the code.

Add command line argument and others

In this part, I modify the command line argument parser to accept new option to set the feature as on/off.

And then I modify a few function signature to make sure it was correctly passed into the filter_code() function.

Last but not least, I write additional unit test for my new function. Then I run the fuzzy test to make sure it work correctly in some real Python code.

Unfortunately, there was a bug for some special case. It is not from my code nor implementation, but it caused by upstream bug from pyflakes which incorrectly provide a wrong report and make the fix function became broke. But after consulting with my mentor @myint, it was considered too specific case and I could ignore it.

The bug itself was documented in my pull request if you want to read about it.

It was my second time reading and writing code for a automatic code linter program, and it was a pretty interesting experience for me. My first time is on autoflake too, when I submitted a patch for enhancment on removing name in from <module> import <few name>. I learn alot from this. Parsing a code is tricky because we must think of every possible way that programmer could write the syntax and many of edge cases. For now, I just learn parsing with regex and it was already pretty complicated.

Overall, I was interested about linter in general. It’s pretty cool that we can write a code for repairing our other code.